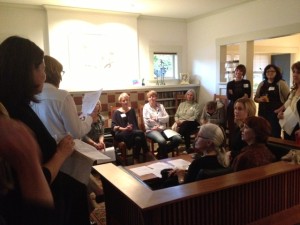 In early 2011, a small group of women learned that less than 2% of foundation dollars in Utah went directly to serve women and girls. In response, the Utah Women’s Giving Circle was formed to change the statistics:

We promote women’s self-determination through networking, awareness, and philanthropy.

We create opportunities for women to share ideas and foster participation of a new generation of women who in turn give, volunteer and advocate for women in the state of Utah.