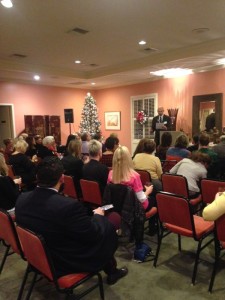 Last night, the Giving Circle members gathered with our 2013 grantees to learn about their work over this past year and how our grant dollars were utilized.

The Legal Aid Society of Salt Lake received a $5,000 award for their Domestic Violence Victim Assistance Program. That grant assisted 23 women and their children in escaping violence in their homes.

As of November, Legal Aid Society assisted more than 1700 women and 1100 children in escaping domestic violence. The impact on just one of their clients is immeasurable:

“On May 19, 2011 at two in the morning, I snuck out of my bedroom where my husband was finally asleep, pulled out the little tracphone my mother had snuck over to me several weeks back, walked into the little bathroom, and sent a single text message:  ‘Mama, come get us.  I can’t do this anymore.’”

“The next day, after my husband had gone to work, my mother came and collected me.  I was 22, six months pregnant, with a two year old son.  My husband had been systematically isolating me for three years.  I did not have a cell phone, I did not have access to the money, and it as understood that I was not to drive the car.  He kept me in the apartment, not allowing me to go to prenatal appointments, and even controlling what, or if, I ate.

After I left, he was angry, but I was not coming back.  Ever.  I looked up the Legal Aid society for help.  In early July, I received a letter from LAS, telling me that they would take my case and that my attorney’s name was Eliza.

It seemed like a simple case at the outset, but it quickly morphed into what seemed like the longest, most heavily litigated divorce in the history of possibly ever.  It lasted for 22 months…in which my husband launched what can best be described as a small scale terrorist attack.  He bombarded me with phone calls and text messages, stalked me, staked out my house, withheld my children from me and used them as bait and bargaining chips.  He became so aggressive that the victim’s unit of the police department called and recommended I go into hiding, which I did.”  “His harassment extended beyond just me.  He raged against everyone he encountered.  The police, [my attorney and the Legal Aid executive director], even court officials.  He alienated the two child visitation agencies in Salt Lake City.

In that 22 months, Eliza stood for me in court at least a dozen times, spent 13 hours in mediation, assisted me in getting two writs of assistance when he absconded with my children, and with the help of [Legal Aid’s DVVA program and its director] Keri Gardner, she got me a protective order and defended it twice.

…In the end, Eliza got me my divorce, with full custody of my sons, and in that same 22 months I went to college and got a degree in paralegal studies.  I now work at one of the premier law firms in Salt Lake and have my own apartment where I live with my children in as much safety and peace as one can hope.  If I had a million dollars, I would give it to Legal Aid Society, ….which has been doing good for almost a hundred years.  I hope they have a hundred more.”

We encourage our members to continue to donate to those organizations that inspire them.

You can learn more about the Legal Aid Society here and make a donation here.