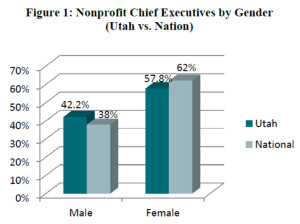 The Utah Women & Leadership project took on the task of zooming in on women leaders in the Utah nonprofits following the 2013 report from the Center for American Progress, which ranked Utah dead last in terms of women being in positions of decision making and leadership. This is the second of four reports to be released in 2014, the first provided a view on women in politics in Utah and the two reports to come will take a closer look at the business and education environments.

The results? Approximately 57.8% of Utah’s nonprofits are headed by female executives, just slightly below national averages, marking the nonprofit sector as a bright spot for female leadership compared to other sectors in the state.